So after teaching Dr Jekyll and Mr Hyde for several weeks, we did an exam type question. If you read through the Jekyll and Hyde thread, you will see the activities that we did in the lead up to this assessment, but I was particularly proud of the timing of the socratic talk because this helped the class to see beyond the text into some really meaty issues.

We spent a little bit of time talking about the requirements of the exam question – here are a couple of slides that we used to illustrate the breakdown: 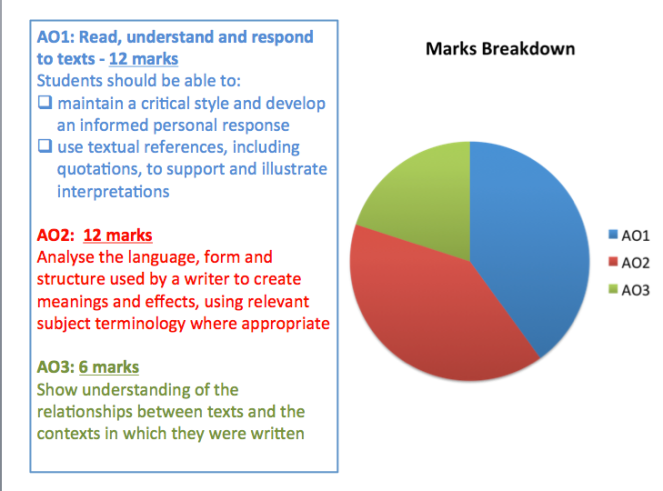 We’d already looked at several extracts so the class were confident with exploring the language and why an extract was important. I kept reminding them that extracts were chosen by people who recognised its importance to the novel, so as a student you have to think “why has this extract been chosen? why is it important?”

Anyway, here are some responses: 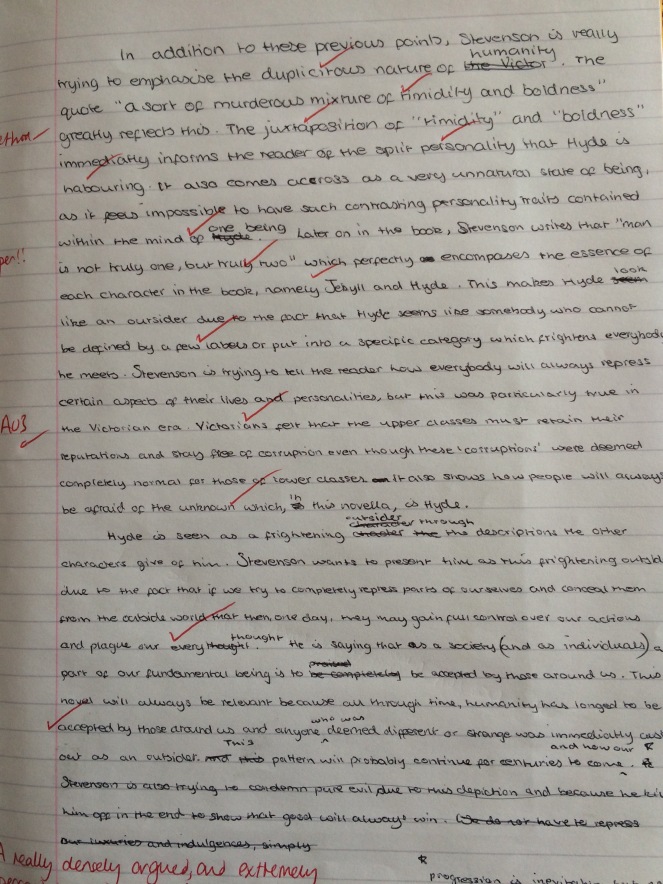 I tell the students to make sure they use Stevenson’s name – this makes them think about methods and thus leads to AO2 analysis. I love the final sentence in that first paragraph “people will always be afraid of the unknown which, in this novella, is Hyde” – there is so much going on there: understanding of how Hyde is an outsider; a consideration of messages and themes, and even a philosophical consideration of the social mores and beliefs.

If AO3 is also concerned with how readers from different times respond to texts then the final paragraph here is well-chosen: the student talks about the relevance of the issues to contemporary readers  – “This novel will always be relevant because through time humanity has longed to be accepted by those around us and anyone who was deemed different or strange was immediately cast as an outsider” . It’s so good that students are able to express their own views on the writer’s messages (and I think that this students’ ability to express these ideas came from our ‘socratic discussion’ activity – see this post

What I love about this one is the way that the student brings in social context in an unobtrusive, seamless way. Look at the way they make the link between science and nature in the final paragraph: Hyde is a creation of science and thus goes against God’s view! However I also love the reference to the ‘supernatural presence’ which perhaps reveals the influence of an understanding of the novel’s link to gothic lit (see here)

Here are a few more:

I really like the phrase “Hyde was not only an outsider in society, but also a threat to it” – this is a really effective synthesis of ideas in the novel. 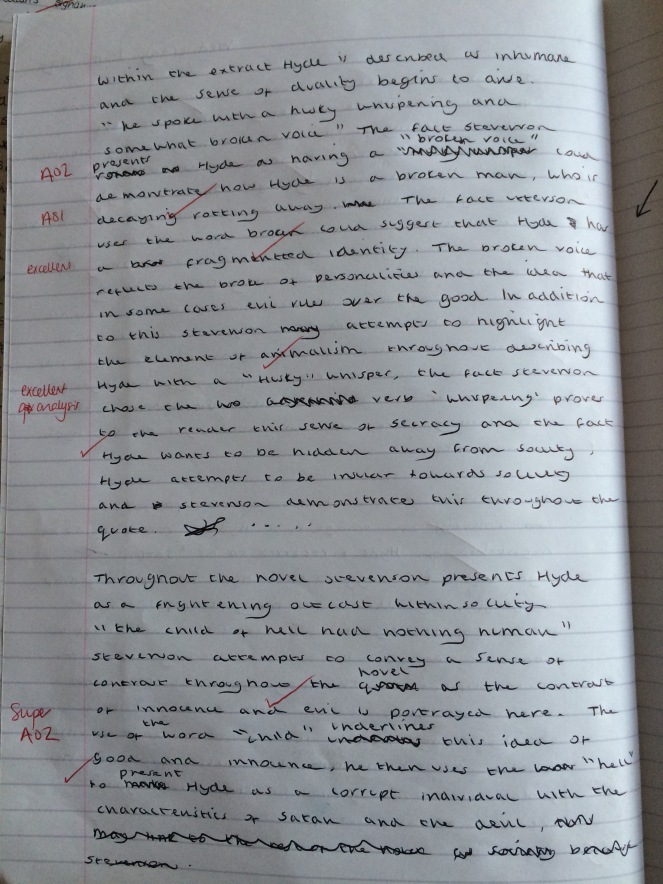 These last two pick up on the motif of Hyde as child-like and links this to the contrast between good/evil and innocence and experience. The subtle connection made to the trampling of the child in the first chapter, and the comment about fragility and weakness I found particularly incisive.

On the whole, I was really pleased with the group’s responses: everyone in the class wrote an impressive answer to the question and we can leave J and H now for a few months, happy in the knowledge that we’ve done a good job in getting to grips with a fantastic literary creation.

2 thoughts on “Dr Jekyll and Mr Hyde – some student responses”