In a previous blog, we looked at comparing The Prelude with Storm on the Island – see here

Here are some examples of the essays the students wrote in response to an exam type question: 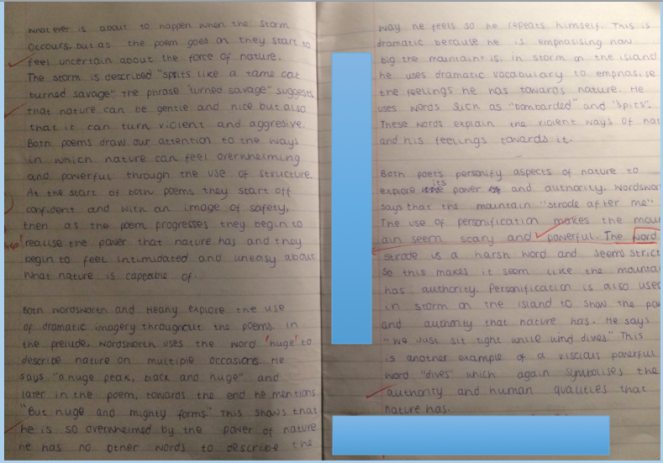 Example 1: notice how the student compares throughout using those ‘coat-hanger’ statements (“both poets…”) to hang the ideas off. The first paragraph could have been made more successful by including some textual reference to support the comments on structure – the student clearly has an grasp of what the poet us doing but she needs to convince the examiner as well and she can only do this by referring to the text. So a simple reference to the beginning of each poem – ‘we are prepared’ and Wordsworth taking the boat; at the end, she could have mentioned how Heaney comments on ‘the strange nothing’ he fears and how this contrasts with their preparation at the start of the poem. Remember we said that both poets seem to end on a tentative note – they both comment on the intangibility of things – Heaney (the storm) and Wordsworth (the shapeless forms that fill his imagination). 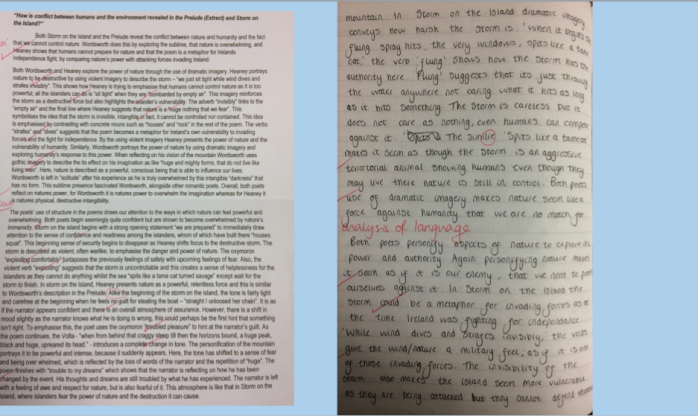 Examples 2 and 3: notice how the student on the left is more confident in writing about structure – detailed references to the beginning, the volta and the conclusions of each poem show perceptive understanding of the texts. The example of the right is notable for its focus on language too and a summarising sentence at the end of the paragraph to ‘wrap up’ the comparison. 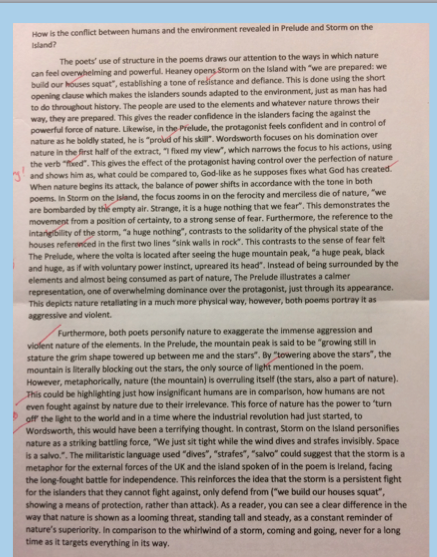 Example 4: I love the way this student writes about the mountain ‘overruling the stars’, and nature’s “power to turn off the light to the world and in a time where the industrial revolution had just started … this would have been a terrifying thought”:  an interesting reference to the industrial revolution which is the student’s own – nature taking revenge on the wounds committed on it by humanity. I’m reading Rebecca Solnit’s Wanderlust: A History of Walking at the moment. In her section on Wordsworth, she comments on the correlation between walking for pleasure through natural landscapes and the rise of industrialisation.

The Romantics often used the sublime imagery of industrialisation in their works: Blake’s The Tyger, for example. Loutherbourg’s painting of ‘Coalbrookdale by Night’ captured the sublime terrors inherent in Romantic responses to the spread of industry. 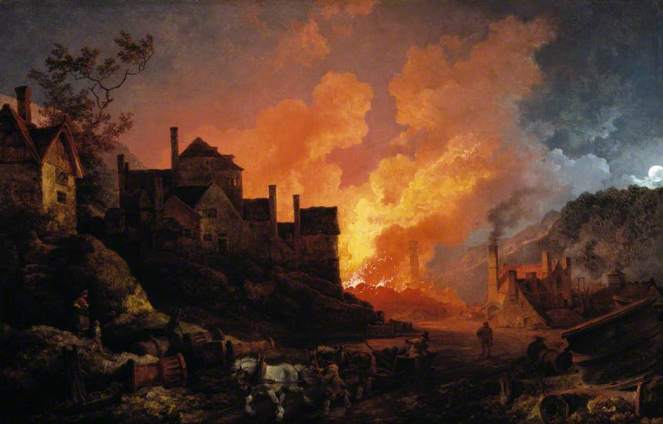 Example 5: talking of the sublime. This essay is overwhelming in its sophistication of response. A fantastic piece of work from a supremely gifted student. 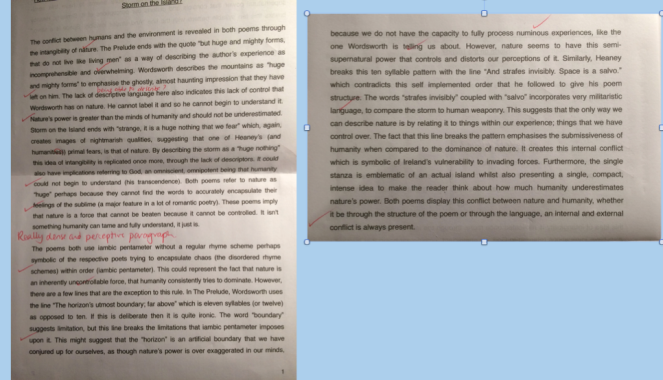 2 thoughts on “A Postscript to The Prelude …”