Eva Smith, it could be argued, is the most important character in An Inspector Calls: from the moment her name is first mentioned, her shadow hangs over every page. Indeed, when the play is over and we read back over those first scenes,  her presence can be felt from the very beginning: from Gerald’s evasive manoeuvres when reminded of his elusiveness ‘last summer’ to Birling’s enthusiasm for lower costs and higher prices which foreshadow his treatment of Eva Smith.

This week we are looking at the importance of Eva Smith. If you’re looking for a fantastic revision resource for this, then look no further than Mr Salles video on YouTube – https://www.youtube.com/watch?v=j4Rkaxr66f4 This is a superbly detailed analysis of Eva’s role and her importance to the play.

Remember that names are important – the writer has chosen these for a reason and will spend some time on deciding on a character’s name. For example, Sybil Birling: the name ‘sybil’ derives from a mythological figure – a prophetess who could divine the future, whose prophecies often took the form of riddles. She asked Apollo to give her eternal life which he granted – with a twist: he gave her eternal life (and with it unbounded wisdom and knowledge) but not youth and she became so old and shrivelled, wishing only to die. In fact, in some versions of the myth, she is reduced to just a voice. The figure of the sybil thus becomes a metaphor for ‘being careful what you wish for’ as well as a reminder of our hubris and impotence – the sybil knows everything and nothing. If you think about Priestley’s character, she too offers the audience an insight into the future – she suggests that the Inspector look to the father of Eva Smith’s child if he wants to find the guilty party. In her apparent ‘wisdom’ she condemns herself of course to ‘eternal’ torment. ‘Be careful what you wish for’ is highly appropriate for Mrs Birling whose judgement on the father of Eva’s child is visited on Eric most dramatically in the final act of the play. Her voice becomes ridiculous and meaningless as we realise how callous she actually is. She knows everything – and nothing.

Interestingly, the two names of Eva/Daisy also link to the idea of nature and an innocence lost. Eve is a symbol of ‘man’s downfall – excuse the lack of gender neutrality – but in the case of An Inspector Calls, she really does bring about a downfall: not of ‘mankind’ but of the Birlings and all they represent. The daisy of course is a common flower and reminds us of the name Smith in its commonality. However, Priestley is also asking us to question these assumptions: despite its ubiquity, the daisy can be a beautiful flower; despite her ‘popular’ name, there is nothing at all ‘ordinary’ about Eva.

This is a play about the exploitation of women. Remember that a method is anything that the writer does on purpose to create an effect. So Priestley’s choice of a woman as a victim of the Birlings’ greed and exploitation is deliberate. Not only does Eva represent the treatment of female workers during the Edwardian era but – as her name represents – she is a symbol of all woman at all times.

Understand Eva and you will understand the whole of the play.

The play was set in a period which felt the winds of change across the world. 1914 is often seen as the beginning of the modern age, the first world war bringing to an end the old world of certainty and progress. An Inspector Calls is set in 1912 – the year the Titanic sank, an event which itself can be seen as a symbol of humanity’s hubris. But this period in time also saw the rise of the suffragette movement which fought for women’s right to vote. 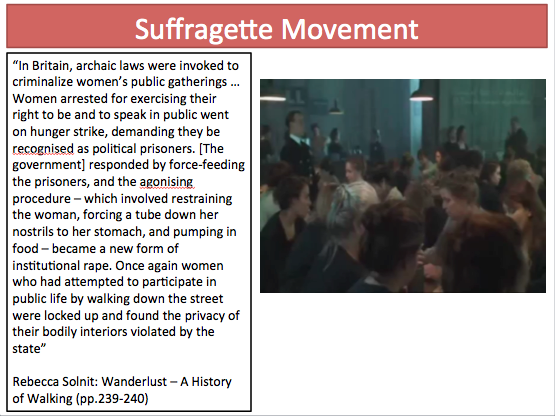 The clip is from a 2004 film called ‘Iron Jawed Angels’ starring Hilary Swank which tells the story of American suffragettes. In the film Swank’s character is force-fed as punishment for her hunger strike. You can find it here but be careful – it is quite disturbing: https://www.youtube.com/watch?v=pO70ZjZ0wrw

Women’s bodies became a site of conflict with the authorities. By controlling them, the old ruling guard of a patriarchal order could hang on to the ‘old ways’. Women were prevented from gathering in public places for fear that their radical ideas might spread. But as Carey Mulligan’s character declares in the recent film Suffragette, “We’re in every home. We’re half the human race. You can’t stop us all.”

So is Priestley a feminist? Well in 1953, he wrote that “the dislike and distrust of women pervades contemporary American fiction” but he was also seen as a womaniser (Gerald anyone?). His novels and plays contained strong female characters and his socialist beliefs meant that he believed in emancipation for women and Eva Smith is a symbol for women’s oppression at that time.

Below are a series of slides from the lessons this week.

Look for a quote to support show how Eric, Gerald and Sheila reflect the idea that women were judged by their looks…

Some suggest (and the Inspector is amongst them) that Gerald ‘at least had some affection for her and made her happy for a time’. However, he could also be seen as an opportunist: he visits a regular ‘haunt’ of women of the town – why? Well, we know why but what does this tell us about him – he was, after all, in a serious relationship with Sheila Birling. He had the opportunity: Eva/Daisy was clearly in trouble, drawing unwelcome attention from Alderman Heggarty; he had the means – his friend had left town and there just happened to be some free rooms. He admits that he meant more to her than she to him and he ends the relationship when it suits himself. ‘Gallant’? I don’t think so.

Eric also treats Eva with little to no respect: look at these quotations here and think about how he uses language to cover up his violent and misogynistic behaviour. 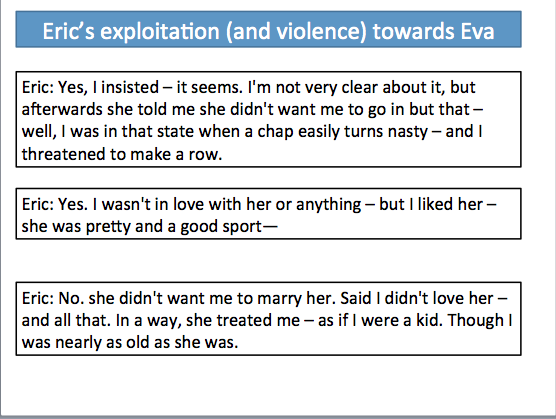 Below are a few slides which we’ll be using in class to inspire some analytical writing. Notice that I’m trying to get students to ‘begin with AO3’ – see the last slide – as I feel that it enables them to write more meaningful analyses. 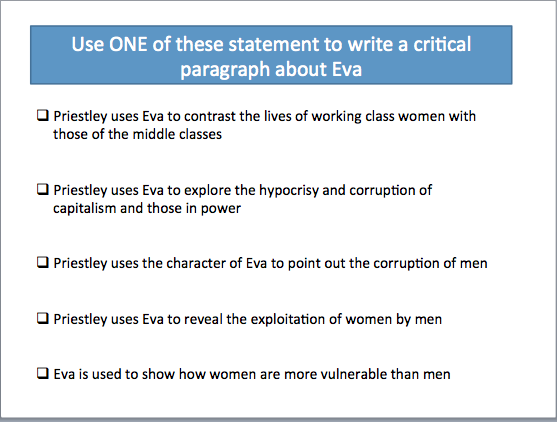 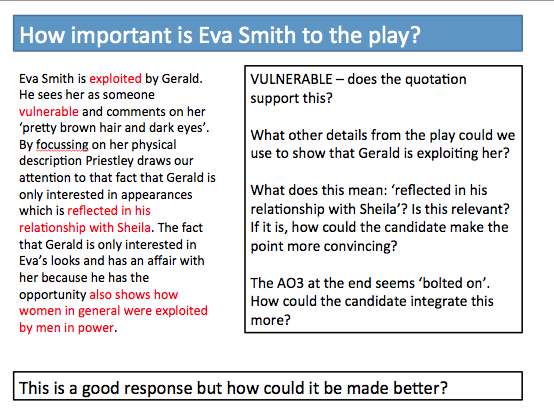 7 thoughts on “An Inspector Calls – The importance of Eva Smith”